Traditionally, the first Monday in October is the day that the US Supreme Court convenes following its summer recess. On Tuesday, Oct 8th the court will hear three cases about whether it is legal to fire someone because of their sexual orientation or gender identity. The court will decide if federal laws that ban discrimination based on sex apply to a person’s sexual orientation or gender identity.

Given the current make-up of the court, the outcome is not certain. If we lose, the decision will codify discrimination into the law and run contrary to the court’s ruling on marriage equality. In 2015, the Court ruled that states cannot deny two people the right to get married based upon their sexual orientation because of the Due Process Clause and the Equal Protection Clause. Same-sex couples, thereby, had the same terms and conditions for marriage as mixed-sex couples. States could not discriminate based on the sex of either marriage applicant. If states can’t discriminate, can employers?

People living with HIV are protected by the Americans with Disabilities Act. This law prohibits discrimination against individuals with disabilities including those living with the virus. That means if you are LGBTQ+ living with HIV, employers cannot discriminate against you for having HIV, but in 25 states they can fire you for being gay, lesbian or bisexual. And in 26 states, you can be fired for being of transgender experience and/or gender non-conforming. Approximately half of Americans reside in a state where you can fired for identifying as LGBTQ+.

Why does this matter to our efforts to end the HIV epidemic in America? Over the last 35 years, we’ve seen and documented the impact that stigma has on PLHIV. We’ve learned how stigma impacts access and retention in healthcare and adherence to meds. Whether the stigma comes from living with HIV, race, sex, gender identity or sexual orientation, it is usually impossible to tell. Our efforts to end HIV must address the stigma that the Court may codify into law. If you can be fired for identifying as LGBTQ+, that makes us by law second class citizens who are not worthy of the same rights as our straight counterparts. 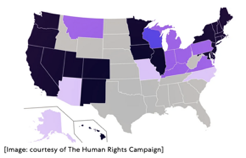 The states colored in grey do not prohibit discrimination based on sexual orientation or gender identity in public or private employment. The ones in purple or pink only offer limited protections for public employees.

How many of those states are part of our efforts to end the HIV epidemic? 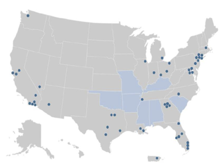 Here is the map for our efforts to end the HIV epidemic. The dots represent the local jurisdictions and the states in blue represent the states that are part of the effort. Of the seven states that are targeted in the federal effort to end HIV, none of them fully prohibits discrimination based on sexual orientation or gender identity in public and private employment.

Regardless of the state or jurisdiction, most people living with HIV feel that discrimination and stigma are challenges that impact their daily lives. Even if the target jurisdictions has laws that protect them (most of them do), they live in the country where the courts will soon decide if they are second class citizens, not worthy of the same protections. This is important because our solutions must fit within the political realities of where people living with HIV live and why we must fight against laws that discriminate against the communities that are highly impacted by HIV.

For decades, Congress has tried to amend the Civil Rights Act to prohibit discrimination based on sexual orientation, sexual identity, sex-based stereotypes, as well as other life facts.  In fact, on May 17, 2019, the House again passed the act, and again, Majority Leader McConnell is refusing to bring it to the Senate floor for a vote.

This is a terrible injustice and we find ourselves depending on a conservative Supreme Court to protect LGBTQ citizens because the Senate has again failed to act.

I’m hopeful that the Supreme Court recognizes the refusal of the Senate to allow a vote on the Equality Act.  Millions of Americans risk getting fired or losing their housing based on who they are and who they love.

On behalf of NMAC’s staff and Board, I strongly urge the Supreme Court to do the right thing – to protect all LGBTQ Americans from employment and housing discrimination.  And I call upon Senate Majority Leader McConnell to stop obstructing justice for these Americans – pass the Equality Act.