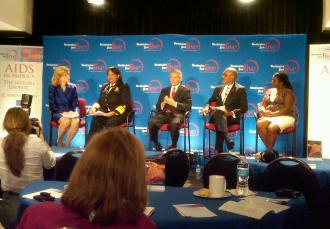 On Tuesday, July 24th, The Washington Post, along with the Ford Foundation and the Kaiser Family Foundation held a half-day forum titled “AIDS in America: The Invisible Epidemic.”  Timed to coincide with the International AIDS Conference, the forum was an important opportunity to examine and identify strategies to slow the rate of infection – especially among minority communities – and better treat those living with HIV or AIDS across the United States.

Speakers at the forum included high level officials like Secretary of Health and Human Services Kathleen Sebelius, United States Surgeon General Regina Benjamin, and Director of the National Institute of Allergy and Infectious Diseases (NIAID) Anthony Fauci.  A number of leaders from the HIV/AIDS community were also present, including, Phil Wilson of the Black AIDS Institute, Patricia Nalls of the Women’s Collective, and Vignetta Charles from AIDS United.

The half-day event focused on the disproportionate impact of the epidemic on minority communities, in particular gay men, especially gay men of color and African Americans and the need to better coordinate our efforts to address the issues that drive the epidemic among these communities.  While a number of structural barriers were discussed, including poverty, racism, homophobia, incarceration, drug addiction, and domestic violence; the theme that permeated the entire forum was complacency. 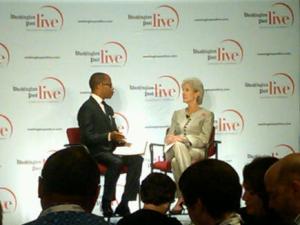 Science has given us the tools to end the epidemic, but government must prioritize efforts to expand access to health care and supportive services in order for these tools to be effective.  More than that, however, it is critical that the American public is engaged in the fight to end the HIV/AIDS epidemic.  One of the most memorable comments came from Vignetta Charles of AIDS United, who noted that she had gotten involved in the fight against HIV decades ago because so many of her white gay friends were dying.  Over the years, as African Americans, especially African American women became increasingly impacted, the face of the epidemic changed.  Just as she had fought for those who did not look like her, Ms. Charles challenged all Americans to fight for those who do not look like them now.

Ultimately, while the forum was extremely encouraging, highlighting a number of major advances in research and policy that have made it possible to realistically envision an AIDS-free generation, it also demonstrated that there is no easy solution to HIV/AIDS.  Like all public health crises, this epidemic is driven by a number of complex societal and structural factors and inequities.  In order to truly bring an end to this epidemic, we all must stand up and demand a health care and social services system that addresses these inequalities.  There is no magic pill, but collectively, we have the power to end this epidemic once and for all.  And that is truly inspiring!