The Heterosexual Black Man: A Missing Key in Getting to Zero

As part of our recognition of Black History Month, we are pleased to present this special guest article written by Pastor André L. McGuire, BA, JD, of Hartford, Connecticut. 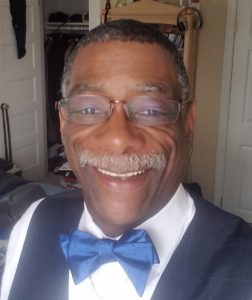 I learned that I was HIV-positive in 1994. It was the day after the President of the United States came to visit a church where I was the presiding officer. I had taken pictures with him. He autographed my bible (the only paper I had in the pulpit when he came). I woke up the next morning preparing to go to work. While in preparation my stomach became queasy, then I had the chills, next I had the sweats, then I thought I had to do number one. While I was trying to do number one it felt like I had to do number two. My body went through this entire cycle at least two more times in rapid succession. I went into the kitchen and told my wife that I needed her to take me to the doctors.

She said she would take me to the doctor with whom she had grown up. I said no, I wanted her to take me to the hospital as I had gone to that doctor several times since I broke out with poison oak. He helped with the poison oak. However, after that I began to get a cough and he would prescribe an antibiotic. It would go away for a short time before returning after a week or so. That recurred about three times in a few months span. I felt as if these new issues were a bit more than he would be able to handle. She took me to Elizabeth General Hospital.

When I came to the ER the doctor took my vitals and within what seemed like five minutes I was being admitted to the hospital. The doctor said he did not know how I made it to the hospital as my left lung was three fourths filled with fluid. I was begun on a high dose of Bactrim to dry up the fluid. After a day or two I began to have a fever of over 103 which persisted for some days. They were unable to break the fever with the prescribed medication and after a while a doctor came and asked if I minded him taking several blood tests. One of which was for HIV. I felt as if I were going to die at any moment so I consented.

The doctor came to give me the test results. He stated I tested positive for AIDS. He stated some astronomical number for the amount of virus in my blood. My greatest blessing was that I had been developing a relationship with Jesus Christ over the prior two years. It was my blessing because when others learned of this disease, while they thought life was over, I had hope. I remembered that, “He which had begun a good work in me would continue it until the Lord Jesus come”. I remembered that because while in the midst of the fever and thinking I was dying, I began to look out the window to see if Jesus was coming. When I did not see him though I was in pain I knew I would be alright.

It also helped that I knew nothing of AIDS, so I asked the doctor what I needed to do. I was told he would prescribe medication for me and that I should take it as prescribed and go see another doctor. I know now that I was also blessed to have been in my own business and to have had my own insurance. I knew how I had received the virus. I had come out of a life style made worse by a substance use disorder with something for which I had not accounted, AIDS. Thank God the virus was undetectable in me for a long time as though we had no proof we now know that undetectable is untransmittable.

I grew up living an extremely promiscuous life. In my neighborhood it was sort of a rite of passage to be sexually active. Unfortunately, many of my crowd based their manhood on how many women they could have. I came to learn that when my first love cheated on me I was hurt so much that I did not want to experience that pain again. As a result, due to a complete lack of coping skills for dealing with emotions, I cheated on every woman that I had after that until I came to develop a life in Christ. Sadly, even then I did not develop coping skills for emotional issues. I did however commit to following God. Between following God and enhancing my relationship with him through the fellowship of Alcoholics Anonymous I did well, for a time.

I eventually was called to Pastor a church and life became very busy as I strove to serve God and man. I was so busy that without being aware I stopped going to AA meetings. I was blessed to go on Missionary trips to Uganda in East Africa and Ghana in West Africa. The church I pastored grew so much that we had to purchase a new edifice. While taking on pastoral responsibilities, I became the contractor in redoing the new building and essentially the realtor in the sale of the old; the architect behind developing a food pantry; the webmaster of the church’s website; a husband and Father of what I thought was six, which in fact were seven; all of that even as I flirted back and forth professionally to earn enough money to care for our family as we took our annual vacation to Canada and then to Florida or Alabama to see my grandmother.

Many things unchecked can devolve into obsessive compulsive behavior. I recognized that God had called me to write a number of books. I had the content in my head yet I never found time to actually write the books. When this obsessive compulsive mind had gone unchecked for some years it eventually became weak. I found myself in prison with no capacity to return to my professional life. Having nothing except God I wrote the five books God had placed within me. I have been blessed financially to be able to publish one, “The Revealing of a Godly Man.”

I came out of prison in 2010. I found myself without money and no relatives in the state of Connecticut. I found myself in church basements asking for money to get clothes. I had to rely upon the state to provide food stamps and the charity of people and agencies for personal hygiene items and a roof over my head. I began to see another side of the AIDS epidemic, the side where many are completely without resources and have to depend upon the state and public charity to survive. Having three degrees and a vast array of knowledge in a number of areas I was unable to find employment for a period of five years.

Thankfully, I began this process with God, as the hope I had in Him kept me. I cried in my room many nights. My job was to find a job. I also made myself available to organizations trying to help persons in my situation. I became a member of the Connecticut HIV/AIDS Planning Council. I met the Greater Hartford Ryan White Planning Council Program Director who asked why I was not a part of the planning body where I lived. I joined. I eventually came to be co-chair of each group and my term was extended another term in each capacity. It was odd though that everyone else was able to get employment earning a fair wage, yet I was turned away as I had a criminal past which no one wanted to deal with.

I sit today writing this article as a Heterosexual Black man wondering why the Heterosexual Black Man is now being ostracized, marginalized, and abused by people who should know better; why, since this disease has browned, those same principles and statements do not apply; why I am not permitted to be a Black Male Heterosexual, accepted as God has created me. I do not have to look and act like someone who I am not in order for us to fight this fight together. All I need to know is that, as a Black Male Heterosexual, I am at the bottom of every food chain and the top of nearly every STI and/or chronic disease listing.

We speak about Getting to Zero as we ignore Heterosexual Black men. We say that we are addressing HIV in the Black community by dealing with Men that have Sex with Men (MSM) and Black women. I see statistic after statistic that places the heterosexual Black man in a category leading the pack in many chronic diseases and with most STIs I see that Black women who will be 70% of the women in this country who are likely to get HIV/AIDS and 70 to 75% of those who have contracted this virus state they got it from a heterosexual Black man.

I have heard many pay lip service to bringing heterosexual Black men to the table or even to desiring to hire them. Then they quickly retreat to “if he did not have that record I could help.” The crime, the voice, and nothing else prevents people from receiving payment for treatment and provision of services to heterosexual Black men. If you are responsible to having a staff that reflects the demographic you serve, why are there no heterosexual Black men? Why do you refuse to hire felons as you complain that others won’t hire them?

We are unable to come to a solution to our problems because we refuse to allow the crowd, those with solutions, those who are at risk and creating risk to come to the table and when we do we refuse to hear their voice. We cannot be driven by the ideas which have brought us to where we are. We must be driven by “Nothing for us without us” by our participation in providing solutions to our problems. Truly, there can be nothing for us without us.

I am continuing on this battle field in spite of those who do not want to hear, because if those who have a voice stop speaking then what will happen to those who have not found their voice? I am on the Greater Hartford Ryan White Planning Council and the Martin Luther King Corridors Initiative in New Britain, Connecticut where I am blessed to chair the Economic Development Committee. Our committee is in the process of developing a Comprehensive Employment Center that we might assist with housing and employment for those with substance use, homelessness, and re-entry issues (the major issues affecting many men of color with whom HIV/AIDS happens to live). I am also a part of a group preparing a Summit on the Health of Black men and boys in the state of Connecticut and I am willing to bet its implication will extend to many other states. So save the Dates of June 10, 11, and 12 of 2020. If you are desirous of attending the event or are in a position to be of assistance with either endeavor please reach out.

Many Blessings and Peace