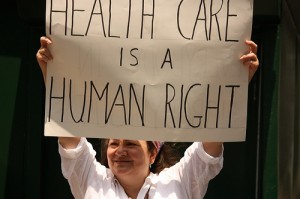 Matt Zofchak is the research assistant at NMAC.

NMAC applauds the Senate’s vote of approval on immigration reform Thursday, a bipartisan product that will offer a path to citizenship for 11 million aspiring citizens. However, the Senate bill comes with many concessions—concessions that will be cost-prohibitive and particularly harmful for immigrants living with or at-risk for HIV.

Under S. 744, most aspiring citizens will have to wait 13-15 years until they can apply for and receive full citizenship. During this time, individuals will be excluded from receiving benefits from many major social safety net programs that they will still be required to pay into—notably, Medicaid. Additionally, during this time individuals will be ineligible to receive the cost-sharing reductions and tax subsidies provided by the Affordable Care Act (ACA). These key subsidies are essential to making health care in the new insurance exchanges affordable. Due to these harmful restrictions, immigrants living with or at-risk for HIV will be denied access to essential health care services (i.e. routine HIV testing and anti-retroviral treatment) that are both cost-effective and in-line with current “treatment as prevention” (TasP).

A number of conservative Senators pushed to add such provisions to the bill to ensure that aspiring citizens “pay their fare share”. However, several key points need to be made. For one, aspiring citizens will already face thousands of dollars in fines and fees which will make the pathway incredibly costly. Moreover, undocumented immigrants are not, as some believe, liabilities to such public benefit programs; rather, they have been major contributors to such programs for many years.  According to the Social Security Administration, undocumented workers have always been substantial contributors to the social safety net, having provided $120 – $240 billion to the Social Security Trust Fund from the beginning of the program through 2007. In 2010 alone, undocumented immigrants were estimated to have contributed approximately $13 billion, while only receiving $1 billion back in benefits. Undocumented immigrants have always been substantial contributors to public benefit programs, but, furthermore, they take out much less than they put in.

And, perhaps most importantly, is the fact that recent polls reveal most Americans are decidedly in favor of aspiring citizens having access to these public benefit programs. According to the Kaiser Family Foundation (KFF), 63% of Americans support aspiring citizens having access to Medicaid benefits and services, while 59% are in favor of aspiring citizens being afforded the same cost-sharing reductions and tax subsidies as other low-income, working-class families across the nation. In accordance with the majority of other American citizens, Senator Mazie Hirono (D-HI) highlighted the fact that doing otherwise would simply be unjust. Senator Hirono writes that “[w]hat are wrong are the policies in the bill that prohibit most immigrant taxpayers from being able to use federal safety net programs for at least 13 years, the minimum length of time on the pathway. Their taxes pay for these programs but they can’t use them. That is profoundly unfair.”

The Senate bill as written effectively denies aspiring individuals their right to health care, and undercuts the potential promise of immigration reform. As debate shifts focus to the lower chamber on the bill, NMAC urges House members and like-minded advocacy coalitions to call attention to these damaging and reprehensible aspects of the Senate bill in the hopes achieving an affordable, just pathway to citizenship for all. After all, truly comprehensive immigration reform includes a pathway to citizenship for all aspiring citizens, including those living with and vulnerable to HIV/AIDS.