Following is a statement from NMAC on the passing of Congressman John Lewis. 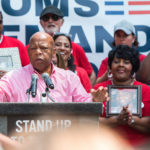 “In one of his last interviews, Congressman Lewis stated ‘you cannot stop the call of history,” said NMAC Executive Director Paul Kawata. “‘You may use troopers. You may use fire hoses and water, but it cannot be stopped. There cannot be any turning back. We have come too far and made too much progress to stop now and go back.’  NMAC’s mission is to lead with race to fight for health equity and racial justice to end the HIV epidemic. As we go on with our mission, we will continue to memorialize Congressman Lewis’s dream by fighting alongside the millions of Americans who were and remain inspired by Congressman Lewis’s drive to make this country a more fair and just country for all Americans.”

“Congressman John Lewis’s voice unlocked millions of American’s who shared his vision that civil rights, including the right to vote, the right to work, and the right to walk down a street without being murdered is a fundamental right which should be afforded to all Americans, regardless of their race,” said Joe Huang-Racalto, NMAC Director of Government Relations and Public Policy. “His deep faith in Americans’ ability to accept and forgive is what earned him the title of Conscience of the Congress. The power of his voice was only matched by the power of the movement he inspired.”