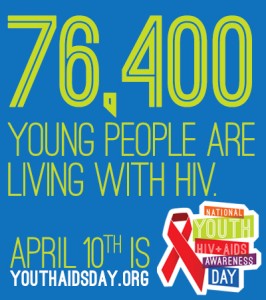 In 2009, each month, nearly 700 young people were infected with HIV, while youth ages 13 to 29 accounted for 39% of all new HIV infections in the U.S. Young gay, bisexual and other men who have sex with men (MSM), especially those of minority ethnic and racial groups, are at an increased risk for HIV infection.

“Though we have the tools to end the epidemic, we’ll never realize an AIDS-free generation without adequately addressing the impact the virus is having on future generations.” said NMAC’s Director of Legislative and Public Affairs Kali Lindsey.

April 10 marks the first annual nationwide observance of the day. NMAC and our 11 founding organizations encourage youth and activists around the country to participate in and plan activities to foster awareness and inspire action to engage young people impacted by HIV and AIDS.

“Young people living with HIV or AIDS face the tremendous challenge of having to manage their virus, all while looking toward bright futures,” said Lindsey. “It should be our goal to provide young people with the comprehensive sex education and resources necessary to prevent new infections and provide care to those who have tested positive.”