Yours in the Struggle

“Yours in the Struggle” is how I close correspondence. The phrase is more than words, it’s an homage to my friend and partner in crime, Michael Hirsch. I moved to Washington, DC in 1985 to fight an epidemic that was killing my family and friends. To this day, I am not sure why they chose me, a 20-something kid from across the country who knew nothing of politics. The serendipity of life meant that I had to find the courage to leave the comfort of home (Seattle) and jump into the abyss of Washington.

Michael was one of the first persons to take me under his wing. He was the quintessential New York activist: outrageous, maddening, and fun. He was also the first executive director (ED) of the New York People with AIDS (PWA) Coalition and the first ED of Body Positive. While at Body Positive, Michael came up with the wild notion of peer provided services. His model using consumers changed the nature of HIV services.

Michael used to come to board meetings and infused while doing business. He always wanted to remind us that HIV was about real people with real problems. It was because of Michael that I got accepted into the PWA community. He insisted I attend organizing meetings that would later become the National Association of People with AIDS (NAPWA). In those days, we didn’t have email. Michael would write these long diatribes about life, the movement, his frustrations, and joy. They were intimate letters between someone who was dying and someone who would remember. In many ways, they were the culmination of his life. He would close each letter with “Yours in the struggle.” 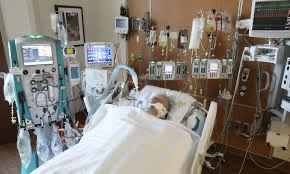 The call from the hospital. A stranger telling you to come quickly because your friend is about to pass. When I got the call for Michael, I was in Washington and needed to rush to New York. I remember hopping that shuttle and praying that he would hold on so I could say goodbye. The taxi ride from LaGuardia to Saint Vincent’s was one of the longest in my life. As I rushed down the hall, I saw Michael’s mother and sister sobbing. My heart sank. I thought he was gone. Just then Rona Affoumado came up to me and said “Oh God, you just made it. The family has just decided to pull the plug.” I wasn’t too late. Rona escorted me into Michael’s room. It was all pumps and whistles from the many machines trying to keep him alive. It had that funny smell, the smell of death. Michael had been unconscious for the last 24 hours. The morphine had stopped the pain and allowed him to sleep. As they turned the machines off, there was an eerily silence. I held Michael’s hand and told him how much I loved him. Just then, his eyes opened, and a single tear rolled down his cheek… and then he was gone. The nurse would later tell me that his opening his eyes was probably just a reflex, but to me it was a sign. It was Michael saying goodbye. I close my letters and emails with “Yours in the struggle” to honor his life and the lives of so many that we lost.

Our work has moved so far from those early days. While we talk about patient centered services, the reality is far more “medical model.” Why have so many people living with HIV fallen out of care and services? The Biden/Harris plan to end the HIV epidemic must prioritize retaining people in HIV services. I believe that starts with Michael’s radial notion of peer provided services. Our movement needs to prioritize hiring people living with HIV to deliver HIV services. They have a unique understanding of the stigma and discrimination that continues to challenge too many living with HIV in America.