Young, but not so invincible 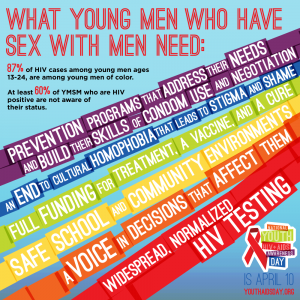 Today we mark the third annual National Youth HIV/AIDS Awareness Day (NYHAAD), an opportunity to raise awareness of and take action against the devastating impact that this epidemic continues to take on our young people.  While today’s youth have never known a world without HIV, many also never experienced the terrifying reality of the epidemic before the advent of highly active anti-retrovirals (HAART) in the mid-90s.  Today, one in four new HIV infections in the U.S. is among youth ages 13 to 24. And each month, another 1,000 young people are infected, with over 76,400 currently living with HIV across the country.

I aged out of the youth category several years ago.  But at 30, I am still part (barely) of the so-called “young invincibles,” which received so much attention throughout the ACA enrollment process.  I’m intimately familiar with the challenges we face in successfully mobilizing this population around health care.  Indeed, I was 29 years old before I took my first HIV test.  I didn’t even have a primary care physician until last October.  As a single, sexually active gay man I knew quite well that I fell into a so-called “high-risk” category – although I felt like this term applied more to mortgage-backed securities than people.  In fact, I had been working at the National Minority AIDS Council for more than two years, regularly drafting statements about the importance of knowing your status.  Our capacity for contradiction and doublethink, including my own, is truly astonishing.

Despite having a generous insurance package through NMAC (too many gay men are not so lucky), and my daily exposure to statistics around HIV and gay men, I was living in a not-so-blissful state of denial.  Like so many in our community, I had engaged in “risky” sexual behavior in the past and knew that, in all likelihood, I had been exposed to the virus along the way.  But what began as youthful denial quickly evolved into self-perpetuating cycle of fear and paralysis.  The closest analogy is putting off going to the dentist.  One year goes by, no big deal.  Two or three go by, and you find yourself delaying the visit for fear of the dentist’s disapproval – not to mention the unknown number of cavities that may have accumulated over that time.  The longer I put off getting tested, the more terrified I became of the results.

When I finally worked up the nerve to take the test – with a little coaxing from a friend (and a bottle of wine) – I purchased an OraQuick in-home test at CVS.  By sheer luck, the results came back negative.  But after more than a decade of being sexually active – and any number of slip ups when condoms were involved – I knew that I was the exception and not the rule.  Thankfully, the list of HIV prevention tools available to (relatively) young gay men such as myself continues to grow.  In September of last year, I started taking pre-exposure prophylaxis (PrEP), enrolling in a demonstration project at Whitman Walker Health, a Washington, DC-based community health center.  The experience has been incredibly positive, not least because I am incredibly lucky to live in a city that is making a concerted effort to implement PrEP into its prevention programming.

Unfortunately, too many young people – especially young gay men – are not getting the information they need to take advantage of these exciting new prevention strategies.  There are any number of reasons for this, from lack of school-based sexual education, to issues around homelessness, poverty and homophobia and other stigmas, as well as limited access to health care coverage itself.  Despite reaching its target of 7 million enrollees, the number of “young invincibles” 18 to 34 who enrolled in private insurance plans through the ACA exchanges was considerably lower than projected.  And efforts to educate the public about PrEP continue to be undermined by misinformation and stigma (see a certain CEO’s reference to Truvada as a “party drug”).  Still, there are a number of great organizations doing amazing work to ensure that young people are empowered to protect themselves and their health.

For our part, NMAC continues to work to develop leadership among youth, especially youth of color through its Youth Initiative Program.  We have also launched our PrEPare for Life campaign, targeting young Black and Latino gay men.  And our RISE Proud initiative is working to empower young Black gay and bisexual men to address the social and structural contributors to HIV vulnerability that drive the epidemic within their local communities.  NMAC is dedicated to empowering young and queer people of color in the struggle to end this epidemic, incorporating them into every aspect of our work.  But we cannot do it without you.  On this National Youth HIV/AIDS Awareness Day, I hope that you will join us by prioritizing your own health and getting an HIV test, staying adherent to your medications if you’re already positive, attending one of our trainings, spreading the word about or programs and/or making a donation.  We will never realize an AIDS-free generation until we address the needs of our newest generation.