What’s In A Name?

The politics of HIV and AIDS can be difficult. Sometimes you have the best of intentions and it still goes wrong. Last week we made a mistake and I apologize. My Facebook post on the United States Conference on AIDS name change set off a firestorm of comments that I hope this e-newsletter will clarify.

NMAC is committed to People with AIDS and the Denver Principles. I was in the room when the Principles were finalized. In 1983, for reasons that are still unclear to me, I was recruited by Richard Dunne from Gay Men’s Health Crisis to come to Washington, DC to be the first executive director of the National AIDS Network. My founding board included Tim Wolfred from the San Francisco AIDS Foundation, Paula Van Ness from AIDS Project Los Angeles, Larry Kessler from AIDS Action Committee of Boston, Jim Graham from Whitman-Walker Clinic, and Michael Hirsch from the PWA Coalition of New York. It was Michael who vouched for me. Because of him, I was at the second meeting for what would become the Denver Principles. I was just a kid, yet there I was in the room with all of the heroes of our movement. It is Bobby Campbell, Bobby Reynolds, David Summers, Michael Hirsch, and Michael Callen who taught me about activism and speaking truth to power. I vividly remember Michael Callen and Michael Hirsch fighting about strategy like men who knew they were dying and the Denver

Principles were their legacy. I am also one of 33 founders of the National Association of People with AIDS (NAPWA) and I am the last one alive. Whether it was a conscious decision or not, there needed to be one negative person in the room who could remember. That job fell to me. I seldom speak about my HIV status because I believe it is implies a privilege that really shouldn’t matter. However, it is my honor and responsibility to remember the stories and to call out the names of those early leaders so our movement will never forgot their courage and sacrifice.

Fighting for people with AIDS is in my DNA and a core value at NMAC. I would never intentionally do anything to erase People Living with HIV or AIDS. When NMAC announced the name change of USCA, we thought we were standing in solidarity with PLHIV. In the past, many leaders have told us that “the word AIDS is stigmatizing.” Per the Denver Principles, NMAC wanted to honor the leadership of PLHIV organizations. How can we reach community if we were using a word that they considered discriminatory? Unfortunately, to some PWAs, our action looked like the opposite of its intention. 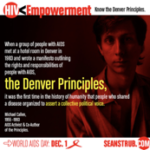 Last Friday there was a call of NMAC’s board, staff, and constituent advisory panels to talk about the name. People of color understand the importance of self-determination and the pain of erasure. Our first step was to consult and work with the organizations that were founded and led by people living with HIV and people with AIDS. We reached out to the Positive Women’s Network, Positively Trans, US People Living with HIV Caucus, and the National Working Positive Coalition to ask them for help. We invited them to the 2020 conference to facilitate a community discussion about the Denver Principles, the use of People Living with HIV and People with AIDS, and the need for our movement to support the principles of empowerment and self-determination.

The name of the conference will be changed to the United States Conference on HIV/AIDS (https://uscha.life/). The revised name was suggested by many PWAs online. Nobody wins when our movement is divided, particularly when it’s about the name of a conference. NMAC may have had the best of intentions, but it was definitely not the right time or way to make the change. We had to move quickly to make these changes, including the welcome video and the Spanish Language version of the site. Please let me know if we missed any of the needed changes.

I would be remiss if I did not mention concerns about the tone and tenor of some of the comments on Facebook. While it was mostly an amazing conversation between activists, a few of the posts crossed the line. As an organization that leads with race, our job is to help our movement understand the impact that race has on our work. A few comments were quick to minimize the contributions of women of color, particularly women of color living with HIV. Assumptions were made about their HIV status that were wrong. Assumptions were made about NMAC’s commitment to the Denver Principles and People With AIDS that were also wrong. While they may not have intended for their comments to be viewed through the lens of race, to people of color certain shares were hurtful and all too familiar.

I don’t know why I got to be in the room at the start of the National Association of People with AIDS or when the Denver Principles were finalized. The meetings were a master class in leadership that formed the foundation for my activism. The San Francisco/New York differences in strategy were the stuff of legends. These were men – yes, it was only men back then and mostly white men – who were fighting for their lives. They talked about empowerment because the world had taken away their power. For some of them, it was their first experience as a second-class citizen, and it made them mad. Everything they believed in had vanished and in its place was a death that was worse than anyone could have imagined. Empowerment and self-determination are shared values for PLHIV/AIDS and people of color. While NMAC’s goal was not to erase People with AIDS, I do understand how our actions could be misinterpreted. We made a mistake and changing the name to the United States Conference on HIV/AIDS is our way to apologize and hopefully move forward. Activism works!

Yours in the struggle,
Paul Kawata