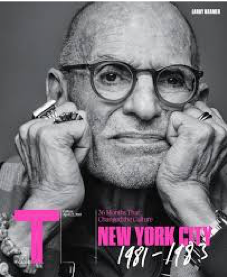 In our fight, Larry Kramer is mythic. As a young queen who was overwhelmed by the loss of so many friends, I found inspiration and courage from Larry’s iconic piece in the New York Native. NMAC is pleased to announce that Larry Kramer will present the opening keynote at this year’s United States Conference on AIDS on Thursday, September 6th in Orlando.

There is a whole generation of activists who have never heard Larry speak. The conference is pleased to give him this platform as we talk about what it means to be over 50 and living with HIV. There was a time when the idea of aging with HIV seemed impossible. Now it’s a reality for most – but not all – PLWH.  As our movement ages, far too many people are living in isolation and depression. Given the trauma associated with HIV, this shouldn’t be a surprise. A better understanding of this trauma may be how we fight for health equity for all communities highly impacted by HIV.

hcare, medications, and wrap-around services has never been greater. Not only is there great benefit to the individuals, but there is also a prevention factor. Ending this epidemic requires leaders from communities living with HIV and people who are sexually active or use needles to work together. We have the science to create real pathways to end HIV. What would Larry say if we wasted this opportunity?

If you’ve never heard Larry speak, then buckle your seatbelts. Larry speaks his truth. In 1993 NMAC hosted a dinner at the Library of Congress for the new Secretary of HHS, Donna Shalala. Larry took over the dinner and proceeded to explain to the new Secretary that not enough was being done to fight AIDS. When I say I’ve been protested by the best, I mean it. It took Donna three years to forgive me for that dinner.

Our movement owes a huge debt to all the leaders who spoke truth to power. It may seem unbelievable now, but there truly was a time… I’m going to leave that story for Larry to share. Join us as we sit at the feet of one of our movement’s elders. Space will be limited and NMAC may need to adjust seating arrangements so that everyone will fit.
Paul Kawata
Executive Director