by Matthew Rose, Policy and Advocacy Manager
Yesterday, in the halls of Congress, on the heels of the announcement a major budget deal, and on National Black HIV/AIDS Awareness Day, NMAC met with staffers from the offices of the Congressional Black Caucus. With a group of dynamic leaders and community members, NMAC helped to deliver an updated call to action, discussing the current state of affairs with HIV and its role in the black community. The session focused on the lived experiences of individuals and the people they work with who are living at the front lines of this fight with a clear call for some of the more basic needs that can help make a difference, like supportive housing, access to healthcare, and stigma free sex education. 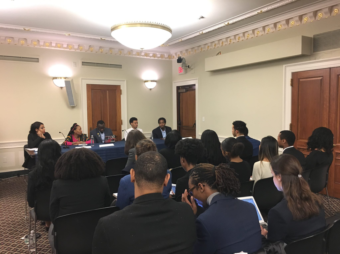 The panelists explained where we have been and where science has led us as a community and country. We now know that if an HIV-positive person maintains an undetectable viral load in their blood, they can greatly improve their health outcomes and cannot transmit HIV. We also know how a pill taken regularly can prevent HIV but these interventions are slow to take hold in black communities. The panel asked for more support from congressional leaders, in both the form of legislation and raising voices of people sharing the truth about the effect of HIV on community and how to change the realities. We are at a tipping point, but it is a question of will. Will we have the strength and support from all levels to end to this epidemic?