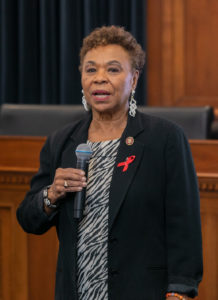 As a national leader in combating health disparities for minorities, NMAC strongly endorses the REPEAL Act, and applauds Congresswoman Barbara Lee’s determination to eliminate discrimination against people living with HIV/AIDS.

“The REPEAL Act will advance efforts to finally modernize laws surrounding those living with HIV/AIDS and, if enacted, will afford those Americans the right to privacy,” said Paul Kawata, Executive Director for NMAC. “We know that disclosure laws are rooted in an old model aimed towards punishing HIV-positive Americans. Those same laws create tremendous barriers for Americans living with HIV, including those serving in our Armed Forces. More importantly, these laws deter self-reliance health practices, which we know is the most effective way of stopping the spread of HIV,” Kawata said.

“This legislation is critically important and long overdue,” added Joe Huang-Racalto, Director of Government Relations and Public Policy. “No other medical diagnosis has a criminal element associated with it. Singling out HIV and prosecuting Americans living with HIV is morally wrong and terribly misguided. As we move towards ending the epidemic by 2030, we must continue to eliminate punitive laws and the stigma associated with HIV/AIDS – an important step in that process is to pass the REPEAL Act.”

NMAC leads with race to urgently fight for health equity and racial justice to end the HIV epidemic in America. Since 1987, NMAC has advanced our mission through a variety of programs and services, including: a public policy education program, national and regional training conferences, a treatment and research program, numerous electronic and print materials, and a website: www.nmac.org. NMAC also serves as an association of AIDS service organizations, providing valuable information to community-based organizations, hospitals, clinics, and other groups assisting individuals and families affected by the HIV epidemic.