NMAC joins in the observance of the annual National HIV/AIDS and Aging Awareness Day (NHAAD) today September 18, 2017. Every year, the NHAAD focuses on the challenging issues facing the aging population with regards to HIV prevention, testing, care and treatment.

Based on statistics from the CDC people aged 50 and older accounted for about one half (45%) of the estimated 1.2 million people living with HIV infection in the United States. Among persons aged 50 to 54, the estimated rate (per 100,000) of HIV diagnoses by race/ethnicity was 59.3% among African Americans/blacks, 23.3% among Hispanics/Latinos, and 8.7% among whites. Of the 6,721 deaths related to HIV in 2014, 2,588 (39%) were among people aged 55 and older. The statistics demonstrate that there is a need, now more than ever, to reach out to the 50+ HIV positive men and women of color in the United States.

Those PLWHIV that are 50 years or older 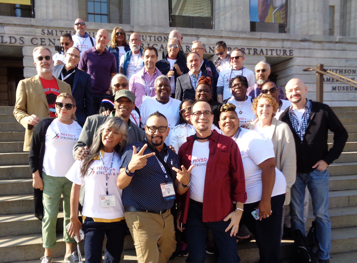 face increased isolation and of those aging people of color, not only face this isolation but increased stigma, lack of access to care, poverty, and racism. Furthermore, when people living with HIV have achieved viral suppression and HIV is well-controlled, there is a need to be educated about other aging-related conditions. People that age with HIV face comorbidities for which they are in greater risk such as cardiovascular disease, diabetes, HIV-associated neurocognitive disorders, osteoporosis, and certain cancers. They also need to be aware of interactions between medications used to treat HIV and those used to treat age-related conditions. That’s why NMAC created the HIV 50+ Strong & Healthy program. HIV 50+ Strong and Healthy seeks to mobilize, engage, and educate people living with HIV who are over the age of 50 on the impact of HIV has on aging people of color.

At the 2017 United States Conference on AIDS (USCA), NMAC had the honor to sponsor 50 extraordinary community advocates that were HIV+ and over 50 years old. Their presence raised awareness about the impact HIV has on the aging population that today currently makes up nearly half of all those living with HIV and in 2020 could represent more than 70% of new HIV diagnoses. For the sponsored advocates, USCA was a coming home experience to network with the community they thought once abandoned them. NMAC is committed to mobilizing the HIV 50+ community, engaging them in building community, and becoming peer educators and advocates. Their resiliency and wisdom is necessary to end the HIV epidemic.  Please read below to see what one of our scholars, Roy Ferguson, shared on Facebook about his experience in the 50+ Strong and Healthy program. 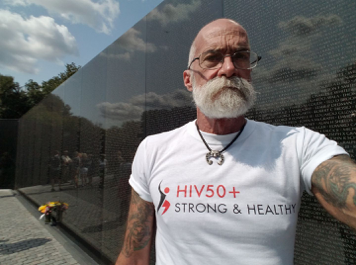 Am home now and winding down from the US Conference on Aids. Was an amazing 6 days. On Wednesday did legislative visits to Sen Dick Durbin’s office, meet with Tammy Duckworth’s Legislative Assistant, Luis Gutierrez’s Legislative Assistant and a personal meeting with Jan Schakowsky (ok may have misspelled her name). Three and a half days of workshops on HIV and Aging.
On Sunday I got a new t-shirt that I proudly wore all day at Washington DC sights and the Vietnam Veterans Memorial. This image is from being at the memorial. The shirt really sums up who I am today.”