NMAC Expresses Deep Sadness At The Passing of Sean Sasser 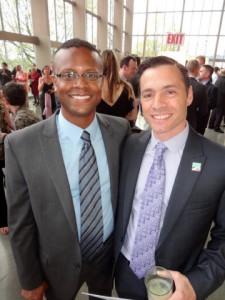 Washington, DC – “On behalf of the National Minority AIDS Council (NMAC) Board of Directors and staff, I wish to extend our deepest sympathies and condolences to our colleague and friend Michael J. Kaplan on the loss of his spouse, Sean Franklin Sasser.  Following a brief battle with mesothelioma, Sean passed away on August 7 at the age of 44.  He was a long time advocate and source of incredible inspiration, living with HIV for 25 years.

“As the executive director of NMAC, and a personal friend to Michael Kaplan, Sean’s death hits extremely close to home.  I knew Michael when he and Sean first met and could tell almost immediately that their relationship would be long lasting and deeply meaningful. Sean was known to the world as a prominent HIV/AIDS activist who rose to notoriety on MTV’s Real World.  To those close to him and Michael, he was known more as a talented pastry chef and gentle soul.  As a black gay man living with HIV, Sean held a special place in my heart and in the work of NMAC to address the disparities that persist within that community.  Sean’s passing serves as a reminder of the considerable work that remains to be done to end this epidemic.  NMAC will honor Sean’s legacy and the thousands like him who struggle every day against this disease by redoubling our efforts to support and foster more black gay leaders to lead the fight.

“Our thoughts and prayers are with Michael, his family and all those whose lives Sean touched at this difficult time.  We pray that the warm embrace from the many that love them and the knowledge of the incredible meaning their work and their relationship have had to our movement and community will help ease the pain of this loss.”

Donations can be made in Sean’s name to AIDS United at www.aidsunited.org/give.