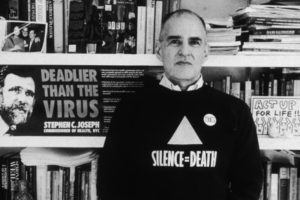 Like many people in our movement, I had a love/hate relationship with Larry. I loved him and he hated me. To me, it was a badge of honor that Larry hated me because it was his seminal piece in the New York Native that changed the course of my life.

Larry’s calls to arms got me to Richard Dunne the then executive director of the Gay Men’s Health Crisis. Richard brought me to Washington where I have lived and fought against AIDS for the last 35-plus years.

In 1993, NMAC held its first sit-down dinner/fundraiser in the Library of Congress called Our Place at The Table. It was a glamorous affair by NMAC’s standards. We honored the new Secretary of Health and Human Services Donna Shalala and celebrated the election of President Bill Clinton. There were waiters who passed hors d’oeuvres and a three course sit down dinner that would end with a speech by the new Secretary. About a week before the dinner I get a call from Larry who is screaming “how dare we honor Shalala. She has done nothing to help our community.”

To be honest, it was both exciting and scary to get a call from Larry. Here was the man who changed the course of my life telling me to un-invite the Secretary. At the time, I did not believe he would come to DC to take over the dinner. Little did I know…

Not only would Larry attend and shout down the Secretary, but she would not speak to me for the next two years! People wonder why I am so open to protests at USCHA. It’s because of Larry. We both understood the important roles we had to play in the drama to end the epidemic. Larry’s job was to make politicians uncomfortable, and my job was to negotiate in the aftermath.

In 2018, Larry was going to keynote the Opening Plenary at USCA in Orlando. Unfortunately, his health was failing. As a result, he said he would send a video message. Two days before the conference was to start, I get this 60-minute video from him. The plenary was already too long, so I decided to play the first 20 minutes.

When I tell Larry, I get a two-word email back from him “fuck you.” What do you do when your hero sends you a two-word message? I apologized and played the entire video at the closing plenary.

Like so many heroes, I’m not sure if I loved the man or the mythology of him. All I know is that his writings changed the course of my life. I was going to be a dentist. Instead I became an AIDS activist. Larry taught me that no one was going to give you power; you had to take it. I’ve spent the rest of my life taking back power, particularly power from the white straight men of Congress.