By Terrell Parker, NMAC Associate  Program Manager – History is best told by those who lived it. However, so much of the early history of Black people  in the movement has been shrouded in secrecy due to shame and stigma. This year, for Black History Month, we are exploring the Black community’s impact on ending the epidemic by highlighting the Black History makers in HIV Past, Present, and Future. 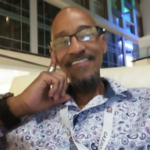 Mark’s career accomplishments include leading Indiana’s Positive Organizing Project in which he developed a state-wide advocacy network of poz people of color and helped organize the first ever Indiana HIV Advocacy Day at the State House. In addition, mark has been the chair of the local Community Planning Group and Indiana Modernization Movement.

What made you join the fight?
Me fighting for my life. I had a diagnosis of living with HIV. I knew there were no changes I could make to change my community. I joined the fight to receive services because we weren’t receiving the same services as everyone else. So we started our own coalition. Brothers Uplifting Brother and Brothers United. At the same time, there was a national movement as well. When we all came together. Black same-gender loving men.

Who were the leaders in HIV that you remember the most from the early days of the movement?
Phil Wilson. Mark Jacksinville, Jim Harvey from Chicago. We started the greater Chicago committee. It was the first work I did in HIV. We started all of that work in the kitchen. The agency and programs started in the kitchen. For same-gender loving men who were considered a social group at first, for parties. Then we added the education and conversation.

Is there anyone who you looked up to as mentor?
Jim Harvey
Ron Simmons from Us Helping Us of DC
Derrick Hicks from Chicago
Roosevelt Mosely – Indiana
Alvan Quamin

What has changed the most about HIV from when you were first diagnosed to now?
Medications has been the biggest changes. States have made room at the table. We are in the rooms now. Before we weren’t. Back then, we were fighting just to get in the rooms.

In what ways have you been a part of history?
Making change. Speaking up and advocating for programs that serve African American men. For the state of Indiana, I co-chaired the priority populations committee for our CPG (community planning group). When I did that, it was the first year CDC mandated that resources go to priority populations.

What is your biggest accomplishment working in the fight to end HIV?
Bringing funding to agencies to do the work. Bringing our voices to the table and making sure we were represented in a time where our agencies were not getting funding. In the early days of advocacy, attending CDC round table discussions. We had been left out for so long, but we fought to have a place. And.. reaching the community. Reaching clients where they’re at. Letting them know everything will be alright. And letting them

What advice would you give to the next generation of leaders fighting to end HIV?
Participate! Be at the table. Be active. Be accountable… And stand up for your community!!