The United States Conference on AIDS is proud to announce our 2020 meeting will be in San Juan, Puerto Rico on October 10-13. NMAC is going to San Juan to bring A) much needed economic development, B) highlight HIV in the Latinx community, and C) to experience a city where English is the second language.

On September 20, 2017 Hurricane Maria struck Puerto Rico and devastated the island. Eighteen months later, they still need economic development. According to the San Juan Convention Bureau, “USCA will provide jobs for over 1,000 people during the week of the conference.” Tourism is the lifeblood for the region; however, people have not returned in the same numbers. Like NMAC did after Katerina, USCA is going to the island to support our friends and the economic development of the region. We expect everyone from New Orleans to show-up and show-out for their colleagues in San Juan.

Prior to selecting San Juan, NMAC confirmed with HRSA and CDC that their grantees could attend. The agency appreciates their support. Since San Juan is one of the prioritized jurisdictions, it’s a great opportunity to learn about their plans to end the epidemic. The meeting was delayed until October 10-13 to be away from the peak of hurricane season.  New 2020 Program Partners include the Latino Commission on AIDS and the Prevention Access Campaign. 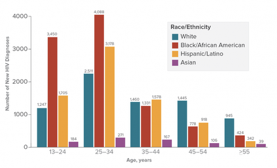 According to the CDC, Latinx gay men passed white gay men with the second-highest number of new HIV diagnosis in 2016. 7,689 (29%) Latinx gay were diagnosed with HIV in 2016 compared to 7,392 (28%) for White gay men and 10,226 (38%) for African American gay men. This report did not list the numbers of gay American Indians, Alaska Natives, or Pacific Islanders. The number of people living with HIV in the transgender community are included with gay men; as a result, there is not a clear picture of the impact of HIV on the Latinx transgender community.

2020 USCA will focus on language and culture and their impact on retention in healthcare and adherence of meds. USCA attendees will be part of a community where English is the second language. The conference will offer some workshops only in Spanish. Like some clients, attendees can experience what it means to have limited understanding of the discussions.

NMAC wants to thank the activists and community-based organizations on the island. We did not want to add to their burden, so the decision to hold USCA in Puerto Rico was ultimately theirs to affirm. Overwhelmingly, they voted “yes” to bring USCA to San Juan, not only for economic development, but also to raise the visibility of HIV in this priority jurisdiction.

The Conference will be held at the Puerto Rico Convention Center. While USCA does not typically use convention centers, it was the only space that could hold the meeting. The main conference hotel is the Sheraton Puerto Rico. In addition, we have rooms at the Caribe Hilton. Many people have fond memories of this hotel. Unfortunately, it was destroyed in the hurricane. The Caribe Hilton just reopened on May 15.

For some, getting to Puerto Rico will be a big sacrifice. Thanks to our constituents from Hawaii, Guam, and the Pacific Islands. NMAC appreciates your continued commitment and support. Puerto Rico is part of the United States, but some jurisdictions think it’s foreign travel. Please feel free to ask for an invite letter to justify your attendance. USCA has the opportunity to bring economic development to a community in need, learn about the HIV epidemic in the Latinx community, and experience a city where English is the second language. Gracias. 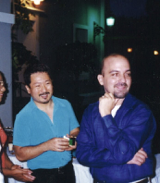 Paul Kawata
30 Years of Service
This photo of me and Rafael Acosta was taken at a reception that Jose Toro and the Fundacion Sida de Puerto Rico hosted for NMAC in Old San Juan.