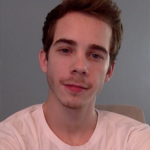 Jorge L. Cienfuegos-Szalay was born in Puerto Rico in 1992. He graduated from University of Puerto Rico in 2014 with a B.A. in Psychology. After graduating, he has spent some time as a voluntary research assistant in the Center of Investigation and Sociomedical Evaluation in Puerto Rico, working with various HIV and HIV-stigma related research projects with the MSM and LGBTQ population. Recently, he has been working on a similar project focused on ascertaining HIV-positive patients’ levels of satisfaction in regards to the services provided by Part B-Ryan White HIV/AIDS Program in Puerto Rican clinics. He plans on beginning his Master’s in Public Health this fall in the University of Puerto Rico, Medical Sciences campus and later in Fall 2017 plans on going to Amsterdam to complete a Master’s in Sexuality, Gender and Society in the University of Amsterdam. He hopes to further prepare himself to enter a PhD program in Clinical Psychology in the future and be able conduct research on topics such as the concept of masculinity in transgender men, HIV, HIV stigma and sexuality.