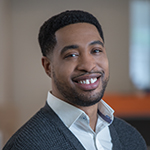 Dustin Baker-Holley is a Program Coordinator in the Capacity Building division at NMAC. Dustin is a native of East Orange, New Jersey and a graduate of Ramapo College of New Jersey. He moved to Washington DC to attend Howard University School of Divinity in 2008, where he graduated fourth in his class. Dustin comes to NMAC as a Program Coordinator a role in which he will provide technical assistance to local and regional non-profit organizations. Prior to NMAC, Dustin has worked in programming that provided direct care to underserved communities affected and effected by HIV/AIDS. In 2016, Dustin was sworn in as a member of Metropolitan Washington Regional Ryan White Planning Council. Dustin is also the co-director of several popular YouTube documentaries. In 2011, Dustin co-directed, “REELDIVINITY: I am THAT I am”, which is a collection of undocumented stories about homophobia, discrimination, and hate within the church.