Leading with Race to The Ballot Box

Leading with Race to The Ballot Box:
2018 Mid-Term Election Edition

Why This Election Matters:

One important consequence of this legacy and continuing evolution of voting restrictions is unequal voter turnout in elections, with white Americans, and particularly affluent white Americans, out-participating people of color, low-income people, and young people by significant-to-wide margins

Why You Should Vote in the 2018 Mid-Terms Elections 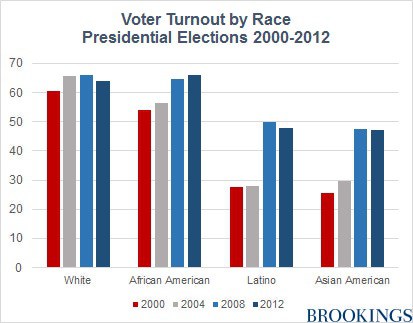 NOTE: When you vote, it forces politicians to pay attention and be aware of your concerns

Over the past several election cycles, minority voters have played an increasingly important role in determining who is elected. That trend is likely to continue as turnout rates among minority demographic groups increases and political strategists note the importance of tailoring messages to such groups to gain an electoral advantage.


What You Can Do as an Organization and Individual:

Bolder Advocacy promotes active engagement in democratic processes and institutions by giving nonprofits and foundations the confidence to advocate effectively and by protecting their right to do so.
READ → https://www.bolderadvocacy.org

What NMAC’s Doing
We want to give our constituents the tools they need to make their voices heard at the ballot box in 2018. We will provide regular, updated information on important deadlines, registration information, and details on the voting process around the country. Click here to access NMAC’s 2018 Midterm Elections Factsheet.